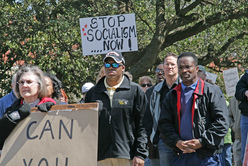 Op-Ed: Tea Partiers know more than pols think
The Boston Herald, October 24, 2010
Throughout the land, howling protests swirl, decrying the impact of immigration upon our shores. People all over the country are driven by fears of the crime, pestilence and poverty that come with the influx of new migrants. As one mayor opined, "Violence and crime have greatly increased and have become a problem of momentous interest. Our jails, however capacious, will be sorely inadequate to the imperious requirements of our society."'
Already, unwelcome visitors make up around half their inhabitants.
In time, the seeds of fear give rise to a powerful political movement. The mantra of the party centers around a simple and rallying concept - no more immigration! Read more. 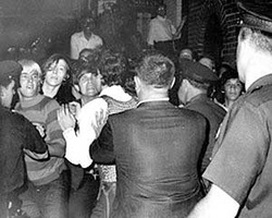 40 years of gay rights: New York’s Stonewall Rebellion
Massachusetts Bar Association Lawyers Journal, June 2009
Ask 100 people who Rosa Parks was and the majority will be able to answer. Ask an equal number about the Stonewall Rebellion or Inn, and few will respond. Why do so few know so little about so major an event? Even many younger gay people are relatively uninformed about the events of June 28, 1969, which launched the gay rights movement.

To place Stonewall in context, it is important to document the plight of gays at the time. Unlike today, at the end of the 1960s, homosexual sex was illegal in every state except Illinois and Connecticut. Gays were subject to being fired from their jobs, as well as being denied housing, based solely on sexual orientation. No laws served to protect them from overt discrimination. If one were discovered to be gay, he was ordinarily summarily fired or his license to practice his profession immediately revoked. There were no openly gay politicians, policemen, teachers, doctors or lawyers. No television show had any identifiable gay characters. In the movies, in the relatively rare moments when gay characters were shown, they typically were either killed or killed themselves. Gay women were so far in the background as to be nearly invisible. Read more.

Some of the following articles are law reviews and others are opinion pieces that I wrote for various newspapers. 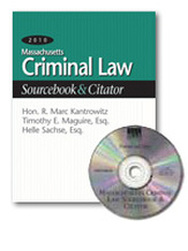 MCLE's Massachusetts Criminal Law Sourcebook & Citator organizes a wide body of frequently needed information into a handy single-volume resource. This popular reference saves time when preparing for trial or when looking for a quick reference. It provides easy access to the key elements of particular crimes; what the Commonwealth needs to prove to support its case; distinctions between related crimes; the lesser included offense in a given crime; available defenses; procedural requirements; key evidentiary issues; and penalties for particular crimes and sentencing options.

The book has been published annually since 1986.  I currently write it along with attorneys Timothy Magurie and Helle Sachse.  To order it or for more information, click here.