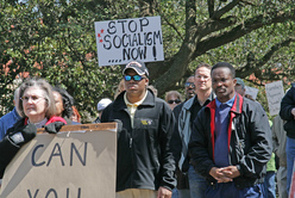 Throughout the land, howling protests swirl, decrying the impact of immigration upon our shores. People all over the country are driven by fears of the crime, pestilence and poverty that come with the influx of new migrants. As one mayor opined, "Violence and crime have greatly increased and have become a problem of momentous interest. Our jails, however capacious, will be sorely inadequate to the imperious requirements of our society."'

Already, unwelcome visitors make up around half their inhabitants.

In time, the seeds of fear give rise to a powerful political movement. The mantra of the party centers around a simple and rallying concept - no more immigration!

The cry came from Boston, and the year was 1850. The hordes of immigrants came not from Mexico or Haiti or other foreign lands, but from Ireland. Indeed in Boston, over a 10-year period, approximately 37,000 mostly emaciated, poverty-stricken Irish came ashore, landing in a city of nearly 100,000. The party that grew out of the fear of immigration was not the Tea Party but the Know-Nothings. And like a thunderclap, its appearance and life was both brilliant and brief.

The Know-Nothing Party was in reality an amalgam of a series of smaller parties, mainly from nativist secret societies. When asked what they knew, the response of party members was one worthy of Sargent Schultz from the old television show "Hogan's Heroes,'' "I know nothing.'' Hence the name, as opposed to its official name, the American Party.

Shrouded in secrecy, the party even avoided the press.

Members of the party bonded over an overwhelming desire to purge the government of career politicians whose business-as-usual attitude was perceived as inept, inefficient and unresponsive to the needs of the people. The platform of the Know-Nothings emphasized curbing immigration, most particularly Catholics coming from Ireland and Germany; with our doors shut, not only would crime and disease be held at bay but jobs saved for native Americans.

So compelling was the message, that the Massachusetts electorate of 1854 overwhelmingly swept the party into power at all levels. Henry Gardner was elected governor by a crushing margin. Know-Nothings occupied nearly every seat in the Legislature and all 11 seats in Congress.

While the times might change, basic human instincts and fears do not. Distrust and animosity, if not outright hatred against Irish immigrants existed in 1854 (and well before as evidenced by the burning of a convent in Charlestown in 1834. Similar animosities exist today, fortunately without the senseless brutality of the 1800s, against a different brand of immigrants. However, the reasons for the hostility are the same - they're different from us, they bring crime, they tax our medical systems and steal our jobs. To save America we must button our borders.

Many Know-Nothings were, like many of today's Tea Party members, law-abiding, concerned citizens with justifiable fears. Once in power the Know-Nothings passed some admirable laws, such as outlawing school segregation in Boston and attempting to address the social ills afflicting society. They soon learned, however, that running for office is dramatically different from winning and ruling.

If history is the guide, one might be wise to resist investing much capital in the Tea Party. The Know-Nothings flew high and close to the sun in the mid-1850s. By the end of the decade they sizzled and crashed in a fall as breathtaking as their rise. Other issues - slavery, impending war and ongoing concerns about the economy - replaced immigration in people's minds.
Clearly, changing concerns today will result in a similar fate to the Tea Party, destined to follow in the same path as the Know-Nothings. However, the latter's message - disenchantment with a perceived elitist ruling establishment unconcerned and out of touch with the ordinary citizen - rings as true today as it did more than a century and a half ago. And politicians who ignore the cries do so, in the short term at least, at their own peril.