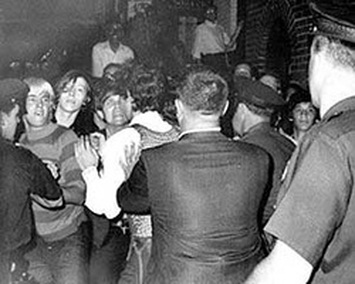 Ask 100 people who Rosa Parks was and the majority will be able to answer. Ask an equal number about the Stonewall Rebellion or Inn, and few will respond. Why do so few know so little about so major an event? Even many younger gay people are relatively uninformed about the events of June 28, 1969, which launched the gay rights movement.

To place Stonewall in context, it is important to document the plight of gays at the time. Unlike today, at the end of the 1960s, homosexual sex was illegal in every state except Illinois and Connecticut. Gays were subject to being fired from their jobs, as well as being denied housing, based solely on sexual orientation. No laws served to protect them from overt discrimination. If one were discovered to be gay, he was ordinarily summarily fired or his license to practice his profession immediately revoked. There were no openly gay politicians, policemen, teachers, doctors or lawyers. No television show had any identifiable gay characters. In the movies, in the relatively rare moments when gay characters were shown, they typically were either killed or killed themselves. Gay women were so far in the background as to be nearly invisible.

Gays could not even publicly gather and socialize, and, if they did, they were subject to arrest if dressed “inappropriately.” Not only considered criminal due to sexual orientation, they were also classified as mentally ill by the medical establishment, as possessing a psychiatric malady.

Countering society’s repulsion was the human need to interact. To meet that basic trait, illicit bars sprang up. Such bars, like the illegal speakeasies during Prohibition, were often owned by organized crime, as was the Stonewall Inn, which was thought to be controlled by the Genovese crime family.

The history of the Stonewall building, located in New York City’s Greenwich Village, is relatively obscure. Built in the mid-1840s as two adjacent stables, numbers 51 and 53 Christopher St., it housed various entities over the years, until nearly a century later, in the 1930s, when the buildings were combined into a single restaurant, frequented by a heterosexual crowd. In 1966, what came to be known as the Stonewall Inn Restaurant closed and was renovated, opening a year later as a private club, the Stonewall Inn, which catered to the local gay population.

To describe the Inn is easy — it was a dive. It had no running water behind the bar and no ice, which had to be retrieved throughout the evening. A mediocre sound system provided the music. Its clientele, overwhelmingly gay men in their late teens to early thirties, ranged from the conservative — the so-called chino and penny loafer crowd — to teenagers who lived on the street, drag queens and even a few transvestites. Despite payoffs to the local police, raids were commonplace. Sometimes employees were arrested, as were those with no identification, charged with lewdness or solicitation. Other times the police merely harassed the patrons and quickly left.

It thus came as no surprise when eight police officers, at approximately 1:20 a.m., on now what was very early Saturday morning, June 28, 1969, swooped in and raided the bar, arresting some employees and “inappropriately” attired patrons. As those arrested were being carted off to the police wagon, however, the crowd, which in the past had scattered upon the arrival of the police, stayed, observed and then violently reacted. What exactly triggered the ensuing riot is unknown. The different theories include the resistance of an arrested transsexual, the arrest of a lesbian dressed as a male or the beating of gays by the police. The truth is probably a combination of the three, the individual events inflaming different members of the crowd, which, for whatever unknown reason, decided that this evening was the one in which a stand would be taken. Bricks, bottles and all objects capable of being used as weapons were hurtled at the police, forcing them to retreat back into the inn. Lighter fluid was thrown through the broken windows of the bar, followed by matches in an attempt to ignite the flammable liquid.

Shortly before 3 a.m., the Tactical Patrol Force, New York’s highly trained and armed riot unit, arrived to find the crowd unwilling to bend to its force. As they charged through the crowd, people merely doubled back behind the troopers.

Approximately 30 minutes after the arrival of the TPF, calm prevailed. Thirteen people were arrested. Ironically, one of those arrested was a heterosexual male who had been innocently walking down the street when the events unfolded before him. Caught up in the turmoil, he was set upon and arrested, despite his only being a passive observer. That person was well-known folksinger Dave von Ronk. Many others in the crowd, while not arrested, suffered injuries, as did four police officers. The inside of the Stonewall Inn was destroyed.

Word of the resistance quickly spread and the following evening, over a thousand people appeared on the scene, as did the police and the TPF. A second night of rioting ensued, ending at approximately 4 a.m. While Monday and Tuesday were quiet, perhaps due to the inclement weather, the masses returned yet again on Wednesday, the final day of the resistance, which resulted in further clashes with the police.

Though resistance to police harassment and abuse occurred prior to the historic events at Stonewall, such as California’s 1966 Compton Cafeteria Riot, it is this series of evenings in 1969, in which people fought back, that crystallized a tangible, organized movement. From those days on, a once splintered group coalesced. Among numerous other events and gatherings, a year later, on June 28, to commemorate Stonewall, the first annual Christopher Street Liberation Day March was held in New York City, attracting approximately 2,000 marchers. Within a few years, similar parades were held throughout America. Today, gay pride marches are held annually in June in cities and towns around the world to celebrate their identities and advocate for equal treatment.

Notes: There are two authoritative books on Stonewall, written by Martin Duberman (1993) and David Carter (2004), from which much of this article is based. Photo by Joseph Ambrosini of the New York Daily News